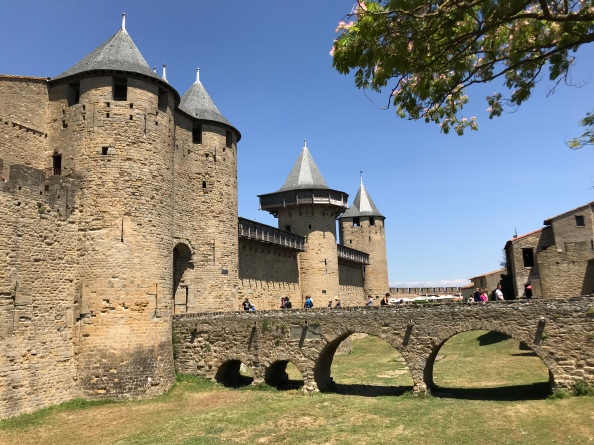 After a trip that lasted over 13 hours I was finally in Toulouse. The city of rose colored houses. While there I was able to relax quite a bit, I was also able to see the city of Toulouse, look around in some very interesting shops. I met Pauline and her parents, ate some good food and tried several dishes of duck. I really must say that duck burgers that we ate at “Duck Me” were, despite the funny name, unexpectedly tasty. It you happen to find yourself in Toulouse I can only recommend that you try them! We also went out to drink beers and I met some other French people which were all really friendly.

I also went to the castle of Carcassonne. This was very interesting, especially from an architectural point of view. The city of Carcassonne was also very beautiful with umbrellas giving shade from the gazing sun. There were also lot of cool shops and I would have been very tempted to buy a lot of things if I just had the money and space to do so.

After spending this time in Toulouse it was time to go to Torino in Italy. Just before going there was a lot of noice due to a victory in football, it lasted long into the night but was still an interesting experience.