So this week I feel like I’ve started to really get the feeling of that I’m actually living here. It has been progressing slowly but now I can find my way around in the city quite easily using different landmarks. I barely need the map anymore for finding the regular places, only when trying to find some new building or spot where I’ve not been much or ever before. I think this sense of localization is due to that I’m walking almost everywhere I’m going. I don’t really feel the need to take the bus since most places I’m going to are within walking distance. But I’ll see what I think when it’s winter, but right now I think that with a good jacket I could probably walk then as well.

This week I’ve glued on the patches to my overall (the result was really neat but I’ll have to sew them on sooner or later for better stability) and used it for one party so far. I got invited to the party bu my friend and tutor Erica. The party was really cool and I’ll be going to more in the future (I really want to use my overall as well). I’ve also been doing pizza with my Italian neighbor Sergio, who showed how a real Italian pizza is made. I’ve also been out buying a microwave for the apartment with another neighbor Ward. 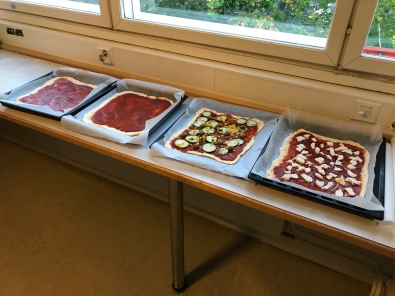 On the school front, there were also a few really nice things happening. I’ve met with a company with which I’ll do my master’s thesis. I’ll reveal more about this as it proceeds but I can tell you that it’s a really cool project that’s taking shape. Except this, I’ve mostly been studying or fixing administrative stuff. The studies are still really interesting, there’s started to be a lot to do, but it’s been going well so far.

So that’s most of the interesting things that have happened this week. Yesterday (actually week 4 but still) me and some of my neighbors started a game of thrones gathering together. We used my computer and screen and sound system, made guacamole and using Alex’s SkyTicket account we could watch game of thrones together from the common kitchen. This was amazing and hopefully we’ll be able to continue watching it together like this in the weeks to come. 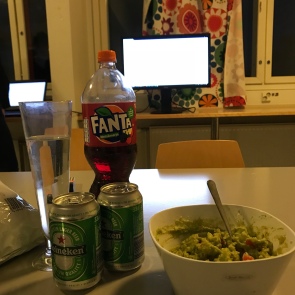